1) It has been requested that rounds be started earlier on Friday due to the start of eThekwini trials the next day. I have to factor in people who are working during the day and cannot make an earlier round, so please whoever cannot make the round before 6pm, please let me know by Wednesday morning. This is an urgent matter.
I will need to draw up a schedule that best suits everyone.

2) Also I noticed that quite a few children qualified to go to Bloem for the SA Schools Tournament. Please can the parents of those kids please confirm with me by Wednesday morning as well if their kid will be going to Bloem as both the schools tournament and one of the club's rounds clashes. Therefore a different schedule will need to be made.

at 16:39
Email ThisBlogThis!Share to TwitterShare to FacebookShare to Pinterest

at 14:32
Email ThisBlogThis!Share to TwitterShare to FacebookShare to Pinterest

1) THERE WILL BE NO CLUB THIS FRIDAY. This is due to the school hosting a school function in the evening.

3) The club executive has decided to temporarily stop coaching sessions on Fridays due to a low attendance. Once there is a peaked interest from players and parents again, the club will resume coaching sessions.

Glenwood Chess Club hosted its first Open Rapid tournament on 1 June 2014 at Northlands Primary School. The tournament was held in honour of former world champion ‘Iron’ Tigran Petrosian for his contribution to chess. After 7 rounds the tournament was won by Mbongeni ‘MC’ Sithole. 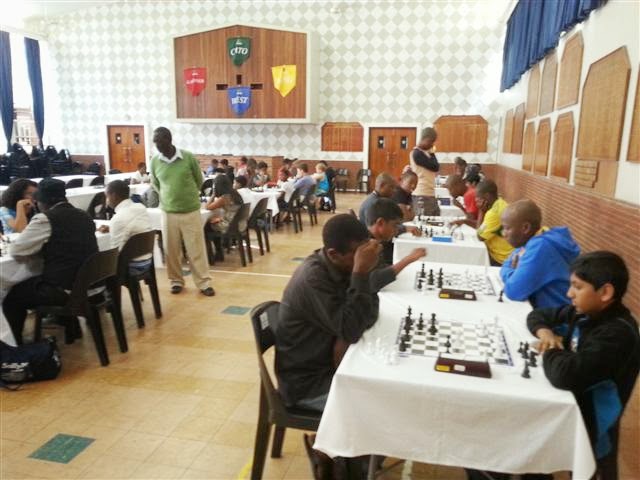 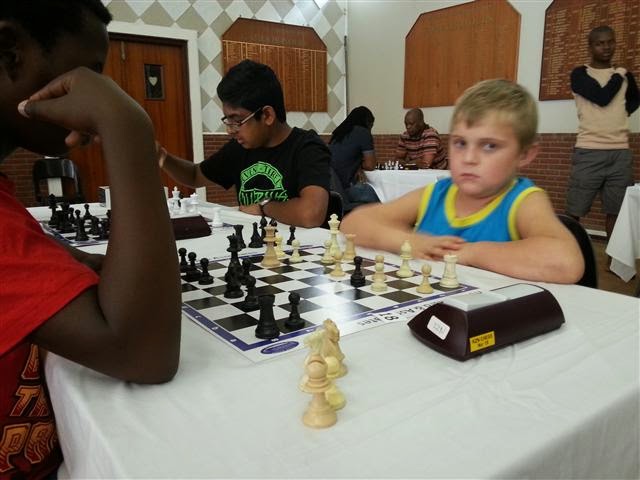 The tournament attracted a strong group of 47 players with 10 players over 1700. There were many upsets and after 4 rounds the 3 leaders with full score were top two seeds Erick Takawira and Joseph Mwale, and surprise challenger Petros Ntombela. Mwale went on to beat Petros in round 5 while GCC president Sayen Naidu took a point of Takawira to leave Mwale clear on 5/5. However, Mwale lost to Takawira in round 6, leaving 4 players, including Bhekinkosi Mgobhozi and Mbongeni Sithole on 5/6 going into the last round. 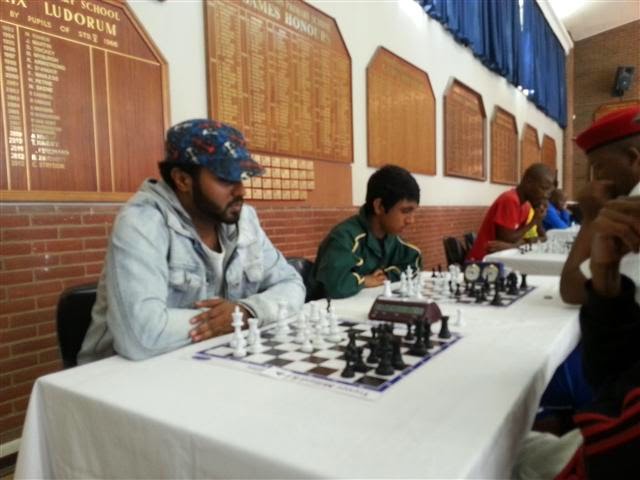 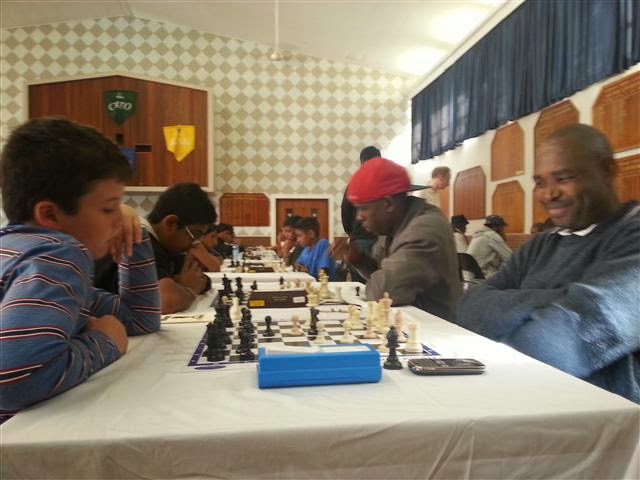 In round 7, the game between Mwale and Mgobhozi resulted in a quick draw, with Takawira playing Sithole for outright first place. The game was never going to be a draw in a messy position after Sithole began a kingside pawn storm with the White pieces after castling kingside, leaving his king unprotected. The position seemed equal material-wise for most of the game, but Takawira got into time trouble and Sithole eventually won.

Thus the tournament was won by Mbongeni Sithole on 6/7, with a three way tie for 2nd on 5.5/7 between GCC members Joseph Mwale, Bhekinkosi Mgobhozi, and Cyril Danisa on tiebreak respectively. The Best Junior award was shared between Genevieve Pillay and Shayur Hansraj, with Genevieve winning it by one bucholz point.\ 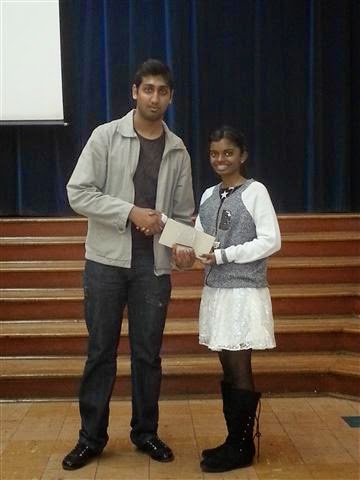 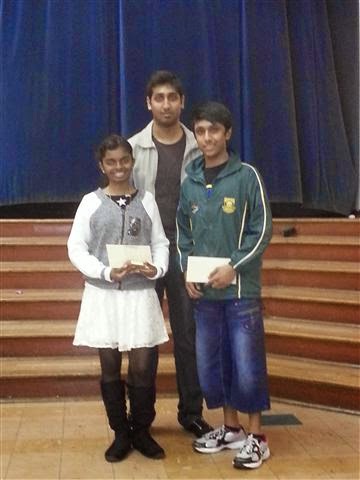 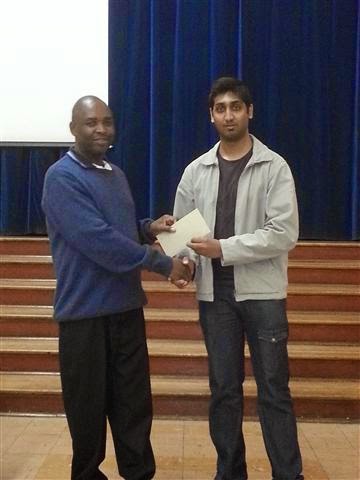 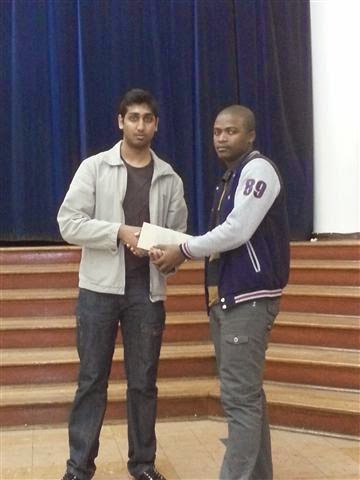 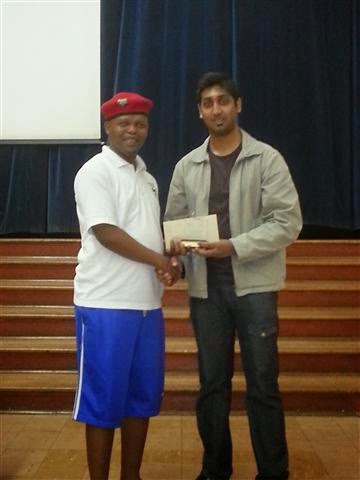 
The full results are here.
at 17:54
Email ThisBlogThis!Share to TwitterShare to FacebookShare to Pinterest

eThekwini District Youth Trials (u8 to u20)

Divesh instructively demonstrates how to trap a queen.

at 23:03
Email ThisBlogThis!Share to TwitterShare to FacebookShare to Pinterest

Mbongeni Sithole won the Petrosian Memorial Rapid with 6/7 dropping only one point.  Sithole proved unstoppable leaving 4 top GCC players in his trail, not even a National Master was able to hold him back.

The full results are here.
at 22:55
Email ThisBlogThis!Share to TwitterShare to FacebookShare to Pinterest
Newer Posts Older Posts Home
Subscribe to: Posts (Atom)